The block pallet is built and designed to have a four-way entry. What this refers to is its structure that allows a forklift to access the pallet from all four sides. The wooden version of this pallet uses blocks of solid wood and sometimes wood, making it possible for it to support the unit load. It’s constructed with nine blocks that typically support seven top deckboards. Thin pieces of wood known as stringer board that create a mat with the top boards are laced in-between the deckboards and the blocks. The length of a block pallet is generally dependent on the stinger board’s length and the width that’s formed by the length of the deckboards. Sometimes, the block pallet is designed to have bottom deckboards that are best for moving and shipping heavy loads because of their robust construction. Plus, they’re practically designed to be moved by using forklifts, since a forklift can lift them from any side. Block pallets can also be designed with various bottoms for different support and forklift entry. These include perpendicular, parallel, overlap, and perimeter bases. Because of their value and quality, you should try to receive them back each time they’re used in a shipment. 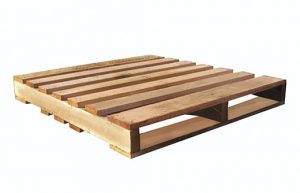 A stringer pallet is designed as a two-way pallet, meaning it’s designed to be lifted by a forklift from two sides of entry. There are two stringers that run between the top and bottom deckboards that give the pallet its name. The sizing of the pallet is specified with the length of the stringer board noted first, followed by the length of the deckboards. There can be stringers designed with four-way entry, similar to the block pallet mentioned above. They are designed using notched stringers that allow for the four-way entry with a forklift. The four-way entry standard stringer pallet can only allow a two-way entry when using a pallet jack. It’s best to use stringer pallets when you want to spend less money on some pallets that will be used to ship a partial unit load. These are also commonly used in shipments in which it doesn’t matter if you receive the pallet back. 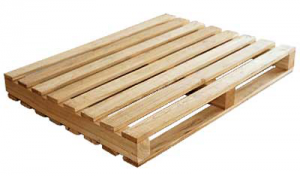 The term double-faced pallet refers to pallets that use deckboards on both the top and bottom of the pallet. When you have a bottom layer of deckboards on a pallet, the pallet’s overall strength is increased, and the weight from the load can be more evenly distributed on the pallet while it’s being transported. This is great for avoiding accidents like a falling load that could break a pallet or result in damaged product.

Double-faced pallets are sold in reversible and non-reversible types. A reversible pallet is designed so it doesn’t matter which side is facing the ground; in other words, either side that’s facing up can be used to hold a load. A non-reversible pallet only has one side of deckboards that can be used for holding the load. If you’re in need of pallets that can carry heavy loads, you’re better off using a double-face design. Not only is it going to be sturdier, preventing risks of the pallet breaking, but you also get the added benefit of being able to set it down quickly, and not having to worry about which side is facing up. This isn’t to say that a single-faced pallet can’t work for your needs; you just need to consider the kind of loads you’ll be working with and having to ship on a regular basis. 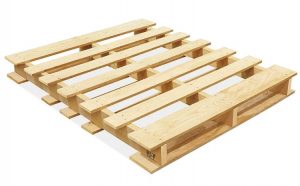 When wondering about the different types of pallets and their uses, it’s important to mention the winged pallet. One of the most significant features of this type of pallet is the way the deckboards hang over the stringers. The overhang created by these deckboards is called a wing. Pallets are typically designed to have all their boards cut flush, with the stringers and blocks aligned beneath them. There are two types of winged pallets. A single-winged pallet is designed with deckboards only on the top face of the pallet. The purpose of the wings is so the pallets can hold greater amounts of weight as compared to other pallets. Winged pallets move the stringers closer to the middle of the pallet, better distributing the weight over the stringers and increasing the overall capacity. With a wider surface area, more product can also be placed on each pallet. This makes winged pallets useful if you’re in need of transporting oversized loads.

The last type of wooden pallet on the market is a solid deck pallet. This is a pallet that uses one large sheet of wood—typically plywood or OSB—without any spaces, rather than utilizing multiple deckboards. Beneath the single sheet of wood, the structure of the pallet remains very similar to other standard wooden pallets, while still using blocks and bottom deckboards. One of the benefits professionals find in using a solid deck pallet is that the solid surface makes them easier to clean and even transport. If you are transporting several smaller items in your load, a deck pallet may be good for preventing them from slipping through the spaces that are typically in-between the common deckboards.

If you’re looking for the right wooden pallets to suit your business needs, contact us at Springfield Lumber Co.  Our professionals at Springfield lumber can assist you from design to delivery to as your single source solution, fulfilling all your wooden pallet & skid needs.